Mr. T will not be in A-Team 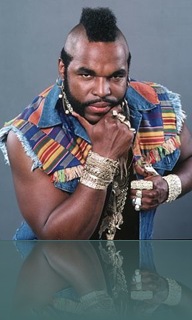 Ya its unfortunately true.

The Latino Review put up a post last week informing us that Mr. T will not make a cameo appearance in the upcoming A-Team movie.

Apparently, one of the guys over at the Latino Review happened to see Mr. T in the gym, and asked him if he would be making an appearance in the A-Team remake.  Mr. T responded no and with good reason. Mr.T was offered a cameo role in the film, but turned it down because he felt that they would play up his role in the movie, which in turn would fool some of his friends and family into thinking that he had a big role in the movie while he had only a small role.

I think that its kind of classy to turn down a role for this reason.  Films have a habit of playing up things that they feel will get people into the theatre when it only makes up a small part of the movie.  I remember when Pan’s Labyrinth came out, the trailers played up the fantasy scenes so much so, that when I arrived late for my movie I thought I was in the wrong theatre.  Sure Pan’s Labyrinth was a really good movie, but I can’t help but feel that I was tricked by the trailers.

So, I applaud Mr. T for turning down the cameo.  Besides what was he really going to be doing in the film that would make his appearance worth while. Its not like they will have 2 B.A. Baracus in the movie.