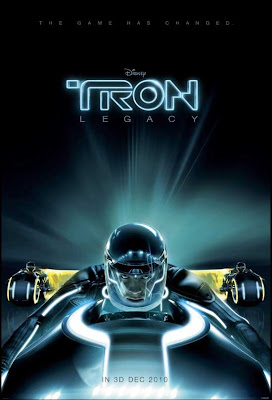 I'm not sure about you, but from the time I first saw the teaser trailer for Tron Legacy, way back in August at the FanExpo, I've been excited for this film project.  Sure, Tron was a film  from my childhood, and so it would be natural if I felt some kind of appeal for this film because of that.  But for me, its the great visual style they have used to create the movie, as well as, the marketing behind it.

I sincerely hope Tron is as good as it looks. If it is, we could be in for a real treat come next year.
Posted by Chris Everything at 8:58 AM