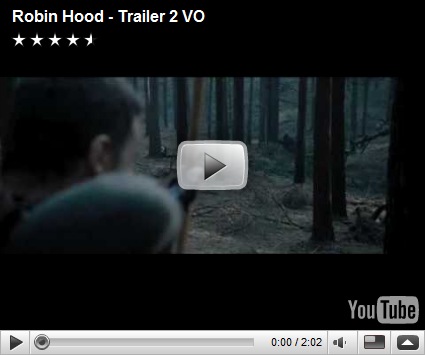 Is it just me or is no one talking about the new Robin Hood movie.

On Sunday, I went to a Christmas party/dinner where I ended up mentioning the new Robin Hood movie and no one really seemed to care.  And you know, I kind of don’t blame them, since I find myself not really caring either.   There was an earlier trailer of this film that was posted to the ‘Script to Screen’ blog and I remember not caring much to see it.

Robin Hood has one of the best directors on the planet directing it, one of the best actor and actress in the world acting in it, but no one is really talking about this film.  Why is that?

For myself, I feel that the problem is that such a good job was done with the 1991 film ‘Robin Hood Prince of Thieves’  that I can’t even picture another Robin Hood film.  Nor can I picture anyone other than Kevin Costner playing Robin Hood.  I guess that Robin Hood comes just a little to close to the previous film for me to really get into it.

In any case, I hope that this movie really starts to get some real buzz behind it.  There really isn’t any reason why Robin Hood shouldn’t be talked about.

Posted by Chris Everything at 11:23 PM