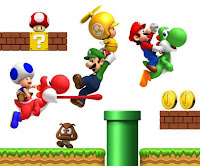 On Friday, Matt Casamassina over at IGN.com put up an interesting post about how he felt Nintendo has been lazy in the development of their games.   Matt's post is pretty interesting, as it draws from an interview that Nintendo game designer Shigeru Miyamoto had with reporters.  In Shigeru's interview he was asked why Princess Peach wasn't playable in the 'New Super Mario Brothers Wii' game.  To this he responded,


...that it would've been nice, but that the physique of Toad more closely resembles that of Mario. "And if one of the four had a dress, we'd have to come up with a special programming to handle how the skirt is handled in gameplay,"he jokes.


Matt continues on to recount many cases were Nintendo has taken short cuts in the development of games.  In fact, Matt goes as far to say that this was done to support Nintendo's 'bottom line'.

Those that have been reading my blog know that I had put up a post a while ago on a similar issue I had with Nintendo.  (If you haven't read it you can read it here.) Certainly Matt goes into a bit more detail than I did, but my argument very much agrees with Matt's.  Nintendo has been sloppy with the games they have been producing.  Currently, the Xbox 360 and the Nintendo Wii are using the same game media (DVDs) and I've always wondered why developers for the Xbox 360 seem to be able to do more with the Xbox 360, then Nintendo is able to do with Wii games.  Nintendo should have a ton more room to maneuver since they are only producing standard definition content and Xbox is doing High Definition.

It saddens me to realize just how much Nintendo has skimped on us this time around.  Matt has been reporting on Nintendo now for at lest 10 years and I'm sure that this article comes out of a sense of frustration with Nintendo.  I feel that same frustration.  I want to pick up my Wii and be excited about it,  but instead I play my PC and Xbox 360.  Sadly.

So, Have you read Matt's Article?  And, Are you still excited for your Wii?
Posted by Chris Everything at 12:24 PM