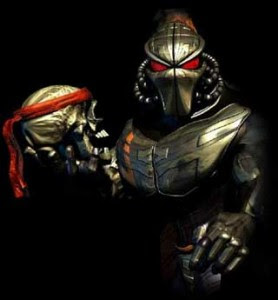 I don't know about you but when I read this article over at IGN.com I got pumped.  I loved the previous two 'Killer Instinct' games and I can't wait for this one to come out.  I remember back in high school playing the previous two Killer Instinct games in the arcade.  They were amazing and I just hope that Rare can do it again with this game.

The other reason I'm looking forward to KI3 (Killer Instinct 3) is that it would mean that Rare is back in the video game industry.  Not that they left.  Its just they've been very absent over that last couple of years,  pretty much only releasing DS ports of games (Well, other than Viva Pinata).  KI3 would represent probably their first major release since Perfect Dark Zero (which wasn't that good).

Rare was a company that when they came out, they only produced hit games, like Goldeneye, Perfect Dark, Donkey Kong 64, etc..  But ever since they were bought out by Microsoft they have pretty much just tanked.  So i really hope they can get back on there feet.

Now I should mention here that apparently this won't be our standard Killer Instinct game.  In the interview with Games TM  magazine,  apparently Mark Betteridge alluded to the fact that this game will use technology from Project Natal.  Now what that could mean for the game play of this game I don't know.  I just hope that they don't commit to much to motion control or it may make for a pretty exhausting experience for us gamers.

What are your thoughts on KI3?
Posted by Chris Everything at 11:00 AM