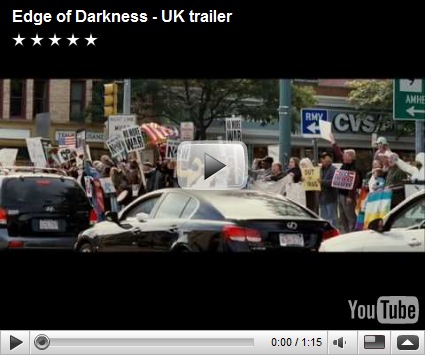 (I saw this trailer posted on The Movie Blog.)

I think the trailer looks pretty cool.  Its really nice to see Mel Gibson acting again as he, up to recently, had been directing movies.

I know that some people are still hung up on Mel Gibson being a racist for the drunken statements he made to police some years ago.  But I very much like Mel Gibson and I respect his acting.

Upon viewing this trailer, the story for Edge of Darkness kind of struck me as a retelling of Payback, but on a second viewing I found that it was clearly a different story.  Edge of Darkness is about find out the daughter’s (Emma Craven) secret.  So it is a bit of a twist from the old Payback story line and makes Edge of Darkness a bit more than a simple revenge movie.  Exactly how different the film will be I’m not sure. But I do have to say that I do like a good conspiracy movie, if its done right.

In any case, what are your thoughts?