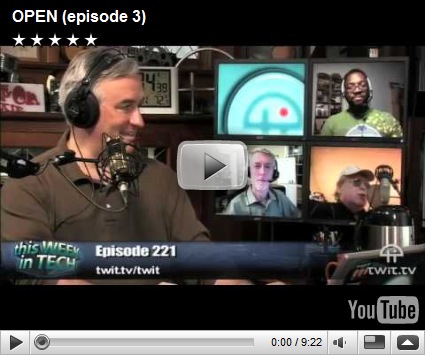 Hey guys.  I spotted this video over on digg.com and felt that it would be good for the readers of this blog to see also.  ‘Open’ is a podcast that focuses on what goes on behind the scenes at the Twit cottage were Leo Laporte runs his Twit network of Podcasts.  The above episode concentrates on Net Neutrality.

For those that don’t know, Net Neutrality is basically a concept that all traffic on the internet should be treated equally and that no one should interfere with any traffic online.  Net Neutrality is a concept that I very much support,  as I don’t want one day to find that traffic to my blog is being interrupted or interfered with.   I understand for issues of censorship my site being blocked, but I don’t want my traffic  being disrupted in favour or someone else’s site.  Nor do I want to pay a high fee so that people can see my site.  I would have to shut down if that happens.

I do also understand the issues facing ISPs (Internet Service Providers),  who have argued that they need to be able to do packet shaping (slow down various types of traffic) in order to insure that everyone can have Internet access.  ISPs have also argued that they want to have the ability to charge for different levels of service.  AKA if you pay them, your sites traffic could experience better speeds online.

Now there are also other issues where by ISPs have crippled the service of another company so that their users have a better experience with the ISPs services.  This clearly is wrong.  No company’s service should be unnecessarily disrupting or crippled by an ISP with a competing service.  There is no justification for that behaviour.

In any case I hope that the Net Neutrality issue is sorted out soon.  Not just for the US, but for everywhere else as well.

Posted by Chris Everything at 12:52 PM