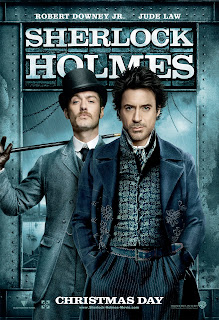 A few weeks ago, I put up a post warning people to stay away from Sherlock Holmes this Christmas due to the likelihood that it would be bad, given its release date.  Well, this weekend some reviews of Sherlock Holmes have come out and currently, Sherlock Holmes is sitting at a 68% on Rotten Tomatoes with 28 reviews.

Certainly 28 reviews doesn't make for an overall consensus on the film, but does give a good baseline.  As we get closer to Christmas,  there will be more reviews that will come out for Sherlock Holmes and we'll get a better picture of where this film stands in terms of reviewers.

In any case, I felt that I should at the very lest acknowledge these reviews, since I had previously warned people not to see Sherlock Holmes.
Posted by Chris Everything at 1:51 AM