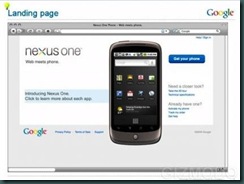 The guys at Gizmodo are reporting that they have received a leak on the pricing of the Nexus One (not the Google Phone, as Google has decided to keep the name Nexus One).

According to Gizmodo’s leak the Nexus One will sell for $530 unlocked though Google at google.com/phone.  For those that want to get a subsidized model, apparently you will be able to buy one through T-mobile for $180 when you sign a 2 year contract. Also, according to another tipster, Google is going to begin to taking orders for the Nexus One at 9am on January 5th.

I really think that this is great news. I live in Canada and so I was wondering when this phone would become available up here.  Assuming that the leak is correct, I will be able to buy the phone regardless of where I live and what carrier I’m with.  Depending on how good the Nexus One is, this could be me next phone, as I’m currently looking to change my cell phone provider and thus need a new phone.

So are you buying the Nexus One?  Do you think it can beat the iPhone?

Posted by Chris Everything at 1:46 PM