The Battle for Mulan 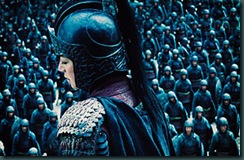 What happens when another country makes  a film about one of your country’s legendary characters and that version of the story becomes the only version that everyone else in the world knows about?

Well that’s what has happened to China with its story of Hua Mulan. For those of you that missed the Disney Version of Mulan,  (I unfortunately haven’t seen it yet myself), Mulan is a kind of a Joan of Arc character that disguises herself and joins an all-male Army.  Disney has been very successful with getting its version of the story out there, being that their film became a great success worldwide and later with a musical version that has appeared in several countries.  Not that it was Disney’s attempt to be the only version of the story that people would remember, but it has happened that way by virtue of Disney’s success.

Disney’s success hasn’t sat well with some Chinese.  According to Time magazine, where I found this story, there is an attempt underway to take the story back for the Chinese People (or so they say). Guo Shu, the executive president of  Starlight International Media Group put into production a live action version of ‘Mulan’ and it has now opened in China, Singapore and Malaysia. If this $12 million project will be able to compete with Disney’s, I’m not sure.

By now your probably saying “Why?”.  What’s the big deal?  The truth is I don’t know.  Then again, I would have to think that it probably wouldn’t sit well with us if China had produced a film about George Washington or Terry Fox and that was the only version of the story that people around the world remembered.  If China wants to do a version of their own story it is fair, obviously if its just for the Chinese people that is fair also.  Apparently, Disney’s Mulan didn’t open very well in China, as it was a bit too American for people there.

Currently, I am uncertain if Mulan will make it over here to the North American market. If Mulan does make it over here, we can judge and see if it was worth all the effort to produce this film or not.  In any case, what are you thoughts on this?  Is this just China not liking Americans telling their stories?