No Thundercats for You 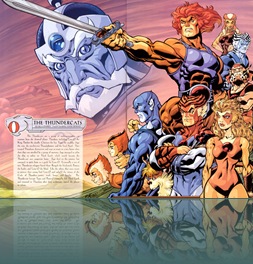 I wish that it wasn’t true, but The Movie Blog is reporting that Warner Brothers has decided not to do the Thundercats.

The Thundercats was one of the shows that I grew up watching.  And even after all of these years I still have fond memories of watching the Thundercats as a kid. That’s why when Wildstorm brought back the Thundercats for a comic book series I started to collect them.  Unfortunately, that to ended.

But, the news of a Thundercats film back in 2007 gave me some hopes of seeing them again.  Warner Brothers has done an amazing job with their animated series over the years with the Justice League and Batman The Animated Series,  so this was a good fit for the Thundercats. Unfortunately,it has come to an end.  Hopefully some other studio will be willing to pick up the rights to the Thundercats.

That being said, Rodney over at The Movie Blog had an interesting idea that I think has some merit.   Rodney was thinking that it would be pretty cool if they gave the Thundercats the Avatar treatment in order to create the Thundercats, given the fact that people in cats suits might look a little goofy.  I personally think that it would be brilliant if the Thundercats were done in the same quality of CGI that the Na’vi from Avatar had.  That way we could have a live action film (which I would like to see) without the goofiness of people in costumes.

Tell me what you think about this idea.

Posted by Chris Everything at 11:28 AM