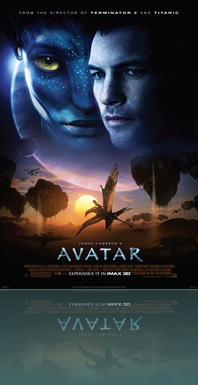 Hey guys.  I was searching through digg looking for what I should write, when I stumbled on this article over on ifc.com’s blog.

In this post the author goes into a rant about how everyone he talks to keeps saying that Avatar is going to suck. Etc.

I'm getting sick and tired of hearing about how much "Avatar" is going to suck because the trailer is loud and has silly dragons and it looks like "Delgo" or something. It seems like whenever I talk to someone about whether or not they're looking forward to the film, their response is "It looks stupid."

Avatar does look stupid.  The earlier trailers haven’t really worked to do any kind of justice to the actually movie, which has been my contention the whole time.  The trailers have been bad up to this point.  They are certainly improving, as I saw a new (and better) Avatar trailer last night when I went out to watch ‘The Christmas Carol’.  But I think its going to be hard to shake the ‘it looks stupid’ reaction people are going to have to this film.  They really needed to start from the beginning to give us good trailers, but instead they coasted on James Cameron’s reputation.

The author goes on to say,

Let's be honest here: pretty much all of Cameron's movies look/sound basically stupid if you only, you know, read about them, and not just in a "genre movies have different rules" way. Like, "The Abyss" is (SPOILER ALERT) about aliens who want to destroy us with a gigantic tidal wave. "True Lies" has a punchline where a nuclear bomb going off is supposed to be funny. "Titanic" has all those moronic Celtic pipes on the soundtrack.

And you know he is right.  James Cameron’s movies really have had ridiculous themes and ideas.  But they have all ended up being really good. I have no doubt that James Cameron could get this film to work also, its just that he really hasn’t directed this kind of film for a few years now and the trailers have been pretty bad.  I think both these things will scare some people off, or at lest cause them to approach this film with some caution.

I personally will end up seeing Avatar.  I’m not sure if I will see it day one, as I’m not in a huge rush to see it.  If I see it the next weekend it really isn’t going to matter that much to me sadly.

In any case, I felt that it was a good idea to at lest bring this article to your attention given the more negative posts that I have put up about this film project.  Also, I just wanted to remind you of the poll that I’m running over on the sidebar.  If you haven’t voted yet, please vote and tell us what your plans are for Avatar.

Posted by Chris Everything at 5:07 PM