John and Rodney Calls it Quits 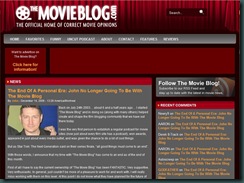 Ya, its a sad time for those that read ‘The Movie Blog.

I’ve been a reader of ‘The Movie Blog’ for the last several years and have enjoyed their articles and commentary on many of the movie related stories that appeared on the site.  I even enjoyed ‘The Movie Blog’ podcast, which was one of the best podcasts that I have listened to.   All of this was made possible my the hard work of John Campea and his colleagues, who built the site from the ground up to where it is now.

On Sunday, John Campea put up a post on his personal blog, stating that he would no longer be with ‘The Movie Blog’  by the end of the month.  This post has since then been reposted on ‘The Movie Blog’s’ Main page.  In this post John thanked everyone for there support and mentioned that Rodney, who had supplied much of the posting over the last several months, would no longer be on the site as well.

This is both a sad and a happy moment for me personally, since John left because he has moved on to other things.  John has in recent months, directed a full length feature film, and is currently working as a Senior Editor over at AMC’s blog, which he helped to start up, called ‘Scripts to Screen’.

So, I really do wish these guys the best of luck in the future and I plan on follow both these guys.  I just learned that Rodney has his own site called ‘The Stub’ that John helped him start up.   And as for ‘The Movie Blog’ its self,  the current owners have put up a post stating their intention to continue the site, and they may seek to get Rodney back as a writer.  Whether it will happen, I’m not sure.  But until then it will be interesting to see what Brock does with the site.

Posted by Chris Everything at 4:38 PM

Email ThisBlogThis!Share to TwitterShare to FacebookShare to Pinterest
Labels: The Movie Blog