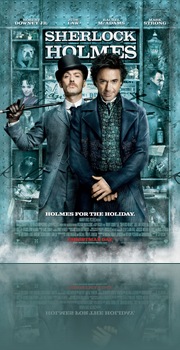 Hey Guys.  I just thought that it was time to put up this warning to those reading my blog.  Many of you may have been seeing all sorts of trailers and previews for this movie online and in theatres for months, and been fairly impressed with them.  I know that I was.  I was very much looking forward to seeing this movie.  Up until I saw the release date.

For those of you that don’t know, Sherlock Holmes is slated to release on Christmas Day.   Now you might ask “What is so special about Christmas Day that has warranted such a warning about this film?”

Well, its just that many films have used Christmas Day releases as a way to hide bad movies.  Let me give you some examples:

And on and on, there have been bad movies released on Christmas Day.  Why? Film studios that know that they have a bad movie will sometimes use Christmas Day as a way of hiding a movie, since people are busy and they don’t have time to read reviews.  So the film slips under people’s radars and they go see it.  Sherlock Holmes is in a position that many people will want to see this film, but will it be good is the only problem I have.  If you still want to see this film (which I will probably end up doing), proceed with caution.

You have been warned.

Posted by Chris Everything at 12:22 PM