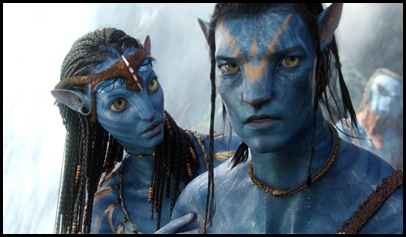 If you haven’t guessed it by now.  Its Avatar Day here on the blog.

On Friday, I had the opportunity, as you know, to go and see Avatar.  Unfortuately, I wasn't able to see Avatar in IMAX 3D, but I did get to see it in RealD 3D.  In any case, by now you're probably wonder what I thought of Avatar.  Is it good?  Well its actually not good, its amazing.

I think that I should probably scale back a bit here and say that although its a great film, there were some weaknesses.

So, what’s wrong with Avatar?
Now that I got the negative out of the way.  I think I should talk about the positive.
In closing,  I left the theatre felling amazed at what I saw from Avatar and I hope to go back and see it again in IMAX 3D.  Also, I would recommend that you go and see it for yourself in, at the very lest, RealD 3D.

Well thats enough from me, go see it.
Posted by Chris Everything at 10:00 PM