Tarantino Could Have Directed the Green Lantern 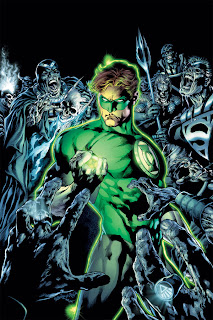 For those of you that didn't hear about this little piece of news over the weekend.  Director Quentin Tarantino, revealed in an interview with MTV, that he was offered the opportunity to direct the forthcoming 'Green Lantern' film.

I also very much like Quentin Tarantino's work.  I have Kill Bill Vol. 1 and 2 in my DVD collection.  (Still haven't picked up Pulp Fiction sadly.) Inglorious Bastards was an awesome movie.  Quentin is a comic book fan.  (Always a plus.)

So, when I heard that Quentin had the opportunity to direct the Green Lantern film and turned it down,  I was disappointed.   Then I thought about it. Normally when two things that are good are put together you get something good.  Like chocolate and peanut butter.  But, in this case I feel that Quentin and Green Lantern would make a bad marriage.

Why do I say that?

For one, Quentin is an R-rated director.  I can't recall any film that Quentin Tarantino has directed that was PG-13. (Tell me if you find one.)  Green Lantern is a PG-13 character.  I can't see Quentin wanting to work in a PG-13 environment, as he likes his blood, his four letter words and adult themes.  (And I can't blame him for liking those things.)  And so, I feel that he would probably find himself feeling constrained on a PG-13 film project.

So, I really don't believe that Quentin would be a good fit for Green Lantern, which doesn't say anything about him as a director.  I just feel that Green Lantern wouldn't be Quentin's style.  Also, whoever offered Quentin Green Lantern was mistaken to offer it to him.  I sincerely hope that someone else is on board the Green Lantern project that has a better grasp of who should be directing the film, or we may be disappointed with the film we eventually get.

In any case,  tell me what you think of this story.  Am I wrong?
Posted by Chris Everything at 7:00 AM