Are You a Nice Guy? 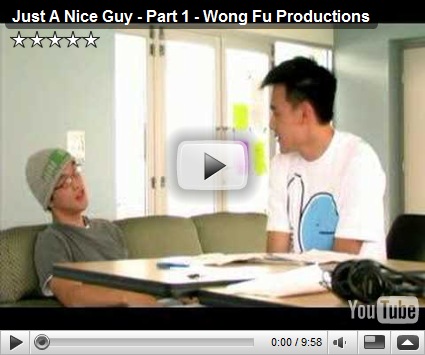 Are you having trouble with the lady?  Finding that you have a lot of girl friends, but no girlfriend.  Well it probably means that your a nice guy.   Nice guys have a lot of trouble out there in the world as it seems that the mean guys always get the girl.  Well, and I guess there is that saying that ‘nice guys finish last’, but I’m sure that has nothing to do with it.

I myself have sadly been the nice guy.  Listening to a lot of my friends troubles and getting close to many women over the years.  The only problem was non of these women wanted to really get that close with me.  By now you probably wondering why I’m telling you this.

Well its because of the video above.  I was looking though YouTube (since I was bored), and I happened to stubble upon this video series done by Wong Fu Production.  Its great and has all the quirkiness that you would want in a TV series (or Web series to be exact).  I really am enjoying this web series and felt that it was a good idea to recommend it to you.

This series is very clearly directed to the Asian community, but I think that a good series is a good series regardless of who is involved or who it is directed to.  ‘Are you a Nice Guy’ has an all Asian cast, and does its production out of San Diego, California.

I’m really surprised that I haven’t heard of these guys before, being that they started production in 2003.  The video posted above was done in 2007.  Some may say that I was just late to the party, but I think that it means that there are gems out there on the Internet just waiting to be discovered. Well at lest that’s the story I plan on sticking to.

In any case enjoy the video and tell me what you think.

Posted by Chris Everything at 8:34 PM