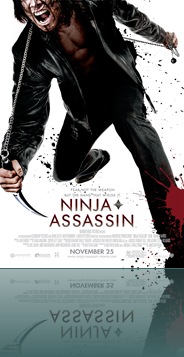 I don’t practise to write a lot of reviews for movies as I’m not a professional movie review, nor is this a film review site.  But I do feel that this movie was deserving of a review seeing as my opinion differs from the over all consensus.
Currently on Rotten Tomatoes,  Ninja Assassins is holding a 29% rating.  But I’m here to tell you that (I believe) this movie rocks.  Ninja Assassins is just awesome. It is the quintessential 80s Action movie, that includes all of the blood and guts, bad acting and over the top fighting scenes that I grow up with and love.  Ninja Assassins even ends with a very 80-esque song that sounds like they took some samples from the Rocky theme song.
Having said that, even though I personally think this movie was great, it isn’t for everyone.  If you didn’t like the 80s style of doing action films your probably not going to like this film, and if you want great dialogue your going to be out of luck.
I thought the story line was ok as it did the job of explained the basic reasons for why the characters in the film are doing what they are doing.  (Just an aside, I personally don’t believe that an action movie needs to have a great story line. The story for me, just needs to be enough to be somewhat believable as the action in this type of movie is the primary aspect and not the story. But that’s just my opinion.)
Even though the film was awesome, there were some problems with this movie.
Having said all that, I would recommend you go out and see this movie for yourself.  If you don’t like seeing blood and gore, this movie is not for you.  This movie by no means is a masterpiece, but then again its not intending to be one.  I hope you enjoy it as much as I did, and go see it.

Posted by Chris Everything at 8:46 PM