For years I’ve looked at the different campaigns PETA has run over the years and I have to wonder what’s up with this guys? 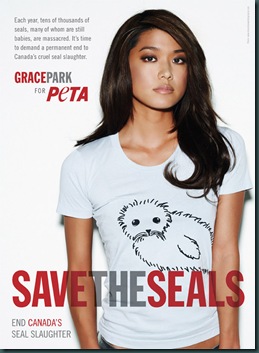 They seem to be very extreme in there beliefs, and the tactics they take to get there message across to people. From having famous models and actresses pose nude to protest fur to the Vegetarians making better lovers and then to this latest campaign to Save the Seals.

The campaign to save the Seals has gained the support of many A list stars from Paul Mccartney, Pamela Anderson and the lovely Grace Park pictured above. But I have to wonder what is the fuss all about.

Don’t get me wrong I don’t believe in the mistreatment of Animals or for them to needlessly suffer for any reason. This same sentiment is also located in the Bible that I draw much of my world view from. In Proverbs 12:10 (NKJV), it says, “A righteous man regards the life of his animal, …”. That being said, why are the seals so important? This year PETA felt it so important to go out and start the campaign to stop the seal hunt months before the actually hunt was to occur and had Pamela Anderson Touring around to get there message out there. 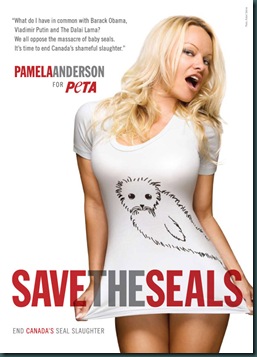 Call me ignorant but I just can’t see why I should care about this campaign or the seals. Sure they are baby seals, but would it really make a difference if they were adult seals being clubbed. When I look at the world and see people killing each other and many people (including children) starving to death each day or dying from unsafe drinking water, I find it hard to care about seals. Where are the celebrities when people are dying. Besides Bono and Bob Geldof, there doesn’t seem to be very much in the way of celebrity support. But pull out a cute animal and there are celebrities around the block.

Well I’ll shut up now before I rant any further. In any case, What do you think? Is this really worth the time and effort that is being put into save this animals? I can’t say that it is.

**** Just a side note I thought that I should give a link back to Disgrasian where I first saw this add posted.

Posted by Chris Everything at 5:37 PM