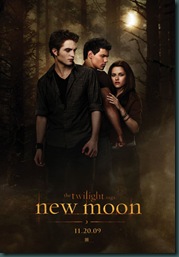 Well not really.  But it did get kind of close this past weekend.

According to estimates, ‘Twilight: New Moon’ broke the record for the most midnight showing tickets sold with $26.5 million and most ticket sales on opening day with more than $70 million dollars (according to the LA Times).   In total, it is estimated ‘New Moon’ made $140.7 million at the domestic box office and $258.8 million worldwide.  (Well  that’s according to Yahoo! News.)

All of this I find impressive give the reaction to the first movie.  New Moon managed to double the amount of money that the first ‘Twilight’ movie made over the same weekend last year.  Don’t get me wrong $70 million is nothing to sneeze at.  I just remember that a lot of people I knew didn’t really like the first one. (I liked it though.)

Perhaps the increased recognition of the franchise lead to the bigger weekend. When the first ‘Twilight’ released no one thought that it would be as big as it was.  I actually never even heard of ‘Twilight’ until about a week or 2 before the movie released.  The theatre that I worked at had so much faith in the movie that they opened it in one of our smaller theatres.  Boy were they wrong.

The day the first ‘Twilight’ released,  I remember going in and hearing that there was a line outside the theatre before the theatre had opened. Those lines continued through out the weekend.  There was so many people (well teen girls) coming in to see the movie that by the evening they decided to move ‘Twilight’ into a larger theatre and bump another film into the smaller theatre that Twilight had been in.  It was insane.  No one thought the first one would do as good as it did and here it was smoking the other films we had at the theatre.The great performance at the theatre by the first Twilight film earned it a sequel, and a third film due out in June of 2010.

I recently had an opportunity to see ‘New Moon’ and I was thinking about doing a review for it.  But then, I felt that it wouldn’t be right for me to do so.  This film is very much directed towards the female audience and as a guy there are a bunch of stuff that I just didn’t get.  Certainly the women in the audience liked it, as you could hear there reactions to things going on in the film.  It just didn’t impact me as a guy.

Its not all that surprising though.  Reportedly about 80% of people that saw ‘New Moon’ were female.  Meaning that we will have to continue enduring the stream of female focused movie that are currently coming to theatres.  Well, not really.

I kind of like the ‘Proposal’ and ‘The Ugly Truth’.  What do you think about the female film phenomena? Do you like it?

Posted by Chris Everything at 10:32 PM