The PETA that Stole Thanksgiving 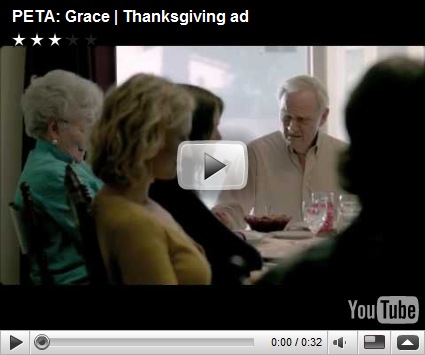 Today, many of you will be sitting down to enjoy a wonderful Thanksgiving dinner.  But It appears that some people don’t like that Idea.

Well, if your eating turkey that is.

PETA is up to their old tricks.   They released a new commercial (which you can see above) just in time for Thanksgiving.  I guess this is an attempt to try and persuade you to go vegetarian this Thanksgiving. Like that is happening.  I can’t really see anyone give up there turkey, but PETA is still trying.  Why? I don’t know.

PETA is a weird organization for me.  I believed that if they got off the ‘Go Veg’ kick they are on,  they could have at lest gotten a lot of people to buy turkeys from more ‘ethical’ sources, just by describing the various health benefits that can come from eating animals that are raised under better conditions.  It would certainly be easier for someone to ‘Go Veg’ if they had the idea to make sure there animals they consume were treated ethically.

But instead PETA has opted for the ‘2X4’ approach.  We will just slap people over the head with these grotesque videos and ads.  Its crazy.  A more subtle approach would work better in my opinion.  Then again, that’s just my opinion.

Posted by Chris Everything at 9:56 AM