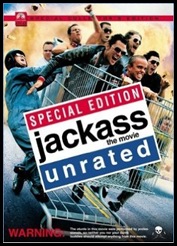 Do you know how to tell that a film franchise has run its course?  You can usually tell when it tries to use a gimmick in order to try and stay relevant.  Its usually at this point in the film franchise that its smart to just give the franchise a rest.  But that I guess is where Jackass says no.

Not that Jackass was a serious film franchise by any count.

But apparently, the guys making Jackass 3 are now saying that they may film Jackass 3 in 3-D.  This is absolutely ridiculous.  I have a hard time thinking that people need to see this film franchise in 2-D much less 3-D.  But I guess that after seeing someone take a baseball bat to the nuts a 100 times it does get a bit boring.

Maybe 3-D is just what Jackass needs to spice up the franchise.  Then again, lets just hope this is the final nail in the coffin for this film franchise.

Posted by Chris Everything at 10:09 AM