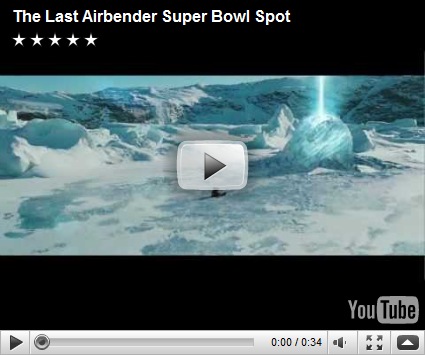 Can’t wait to see this.

I’ve been a fan of the Nickelodeons' Avatar: The Last Airbender ever since it first aired back in 2005.  Its just a bit disappointing that they couldn’t use the Avatar name given the other big film that was released by the same name.

But I guess I can settle for ‘The Last Airbender’.  My other piece of disappointment is the fact that M.Night Shyamalan is the director of the film.  Don’t get me wrong.  M. Night has directed some pretty good films, especially as we talk about ‘The Sixth Sense’.  But M. Nights been a bit of hit or miss lately.

Add to that, the fact that they used a 10 year old boy to play Aang.  In the American Anime series it was ok to have Aang as a young boy, but in a film I think that it may look a bit stupid.  I would have preferred to see a teen Aang, rather than a 10 year old Aang.

In any case, I can’t wait to see what they have done to Avatar: The Last Airbender, even if its just bad.

So are you excited for ‘The Last Airbender’?

**** By the way, I saw this posted over on AMC’s Script to Screen blog.  Click here to see their post.