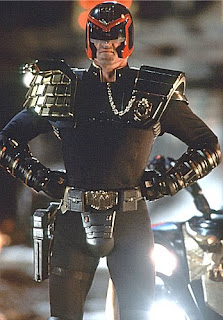 The Movie Blog is reporting that a Judge Dredd remake is in the works.  Judge Jedd, for those that don't know, was a film based off of a comic strip named 2000 AD and featured a futuristic world were judges work as police officers and are able to try, sentence and punish criminals on the spot.

Those that saw Judge Dredd will remember that the 1995 film stared Sylvester Stalone as Judge Dredd, and was actually a very cheesy and kind of bad film, holding only a 15% on Rotten Tomatoes.

Well, it appears that the guys behind the Judge Dredd remake have learned a thing or two from the first Judge Dredd film and have wisely decided to bring in the comicbooks creator (John Wagner) to give approval on the film-making process..  I think this is a really good idea.  Who knows Judge Dredd better than his creator.  By bringing in the comic book's creator it insures that the spirit of the comic will hopefully get captured on film.

The fact that the creator of Judge Dredd  is involved really does give me some hopes for the project.  I think Judge Dredd was a pretty interesting concept that didn't really pan out the first time around.  I just hope they get it right this time.
Posted by Chris Everything at 12:13 AM