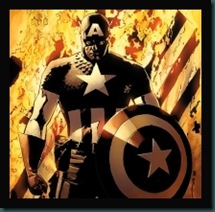 The Movie Blog is reporting that Chris Pine maybe play Captain America in the upcoming film.  Well that’s what the leading rumours are saying.

Apparently, the reasoning behind the rumours seems to be the fact that Chris Pine is a recognizable enough of an actor, but is probably still working for pretty cheap.  He is also Athletic, charismatic and has a relationship with Paramount.

Certainly, the above reasons make Chris Pine ideal, but they hardly position him in the lead.  Now, if there was rumours that Paramount had approached Chris to play Captain America or that he was being considered for the role, it would be a different story,  but right now I have to wonder if he will be connected with the film at a later date.  Although I must say that its great to speculate.

So, what do you think?  Is Chris a good chose for Captain America?

Posted by Chris Everything at 12:56 AM