Riddick Returns to the Basics 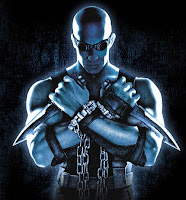 The Movie Blog is reporting that not only is Vin Diesel confirmed to reprize his role as Riddick in the upcoming Riddick film,  the film franchise will be attempting to go back to what made the series good in the first place.  This move follows Vin Diesels successful return to the Fast and the Furious franchise, in which they also took a back to the basics approach to that franchise.  And it worked. 'Fast and Furious' made over $155 million on a budget of about $85 million, while the previous film 'Fast and the Furious: Tokyo Drift' only pulled in over $62 million at the box office.

I really like the idea that Vin Diesel is back playing the Riddick character.  He fit the role perfectly and I really can't think of anyone else that could play the role as good as he did.

Also, its good to know that the Riddick franchise will continue.  I'm a big fan of the previous two films and I was a bit worried when the last film didn't do that well at the box office.  I loved it, but it was clear that a lot of people just didn't. But with Vin Diesel's star rising again, and them going back to what initially got the franchise started I think this could be a winner.

But enough about me, what do you think?  Are you a fan of Vin Diesel?
Posted by Chris Everything at 4:27 PM