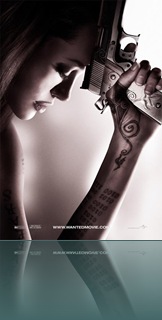 She will definitely be missed.

The Movie Blog is reporting that Angeline Jolie has walked from Wanted 2.  Apparently, Jolie was in talks to star in another film called Gravity, but Universal decided to pass on it, and so, Alfonso Cuaron, the film’s director, took Gravity to Warner Bros. who will develop the film with Legendary.  And thus Jolie walked.

Ever since the announcement that there would be a Wanted sequel and that Angelina Jolie would be returning to the film project.  Many people have wondered just how that would happen.  ****Spoiler:  (skip to the next paragraph if you still haven’t seen Wanted).  As Angelina Jolie’s character ‘Fox’ shot herself in the head at the end of the last film killing herself, at lest we think she killed herself.  But, there is now some speculation that Wanted 2 was going to be a prequel to the first film, which would have allowed Jolie and anyone else that wanted to, the opportunity to return for the sequel.

But with Jolie walking from Wanted, Universal has opted to cancel the film. (frown)   Which is kind of sad given how good the first film was. But then again, this could be a good thing. I really believe they should have been doing a real sequel to Wanted and not a prequel as some have speculated.  Find a new bad guy and have James McAvoy return to his role as Wesley Gibson, in order to take out this new bad guy.

I would really like a sequel.  What do you think? Do you want a sequel to Wanted?

Posted by Chris Everything at 10:30 AM