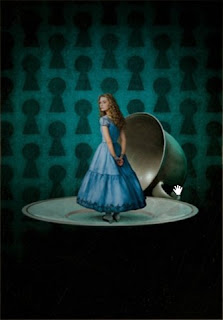 A week ago, I put up a post discussion how many theatres were considering or threating to not carry Disney's Alice in Wonderland due to Disney's decision to short the theatrical run of the film.  Well it appears that the threats have turned to action.

The BBC is reporting that Odeon will not be carrying Alice in Wonderland in some of its theatres.  Odeon & UCI Group is currently the largest theatre chain in Britian and operates in several other countries.  Odeon's decision to not carry Alice in Wonderland will effect their theatres in the UK, The Irish Republic and Italy, where Disney has decided to shorten the theatrical run.  Odeon has stated that their decision not to carry 'Alice in Wonderland' was due to the fact that Disney's decision would work to undermine smaller theatre chains, as well as, undermine all the money the Odeon has invested to make their theatres 3D capable.

Disney however has argued that the reason for the shortened theatrical release period, is to help them combat piracy.  Apparently, Disney feels that by shortening the theatrical run of a film and then rushing out the DVD or Blu Ray of the film (in this case Alice in Wonderland), they can curb privacy. The basic logic behind this idea is that, theatres normally have a 17 week (in the UK) exclusivity agreement in which they are allowed to show a film and the distributor of the film is not allowed to release the DVD or Blu Ray of the film during that period.  But theatres always had the right to end their run of a particular film earlier than the 17 weeks, thus leaving no legitimate way for anyone to see the film during that period.  Thus by shorting the exclusivity agreement they are able to get the Blu-rays and DVDs out faster thus giving people a way to see the film and hopefully curbing piracy.

Although I can see Disney's basic logic in deciding to shorten the theatrical run of 'Alice in Wonderland' to help stop piracy,  I kind of doubt it will work.  Certainly, if someone wants to see the film and they have no legitimate way of doing so, I have to agree some people will be downloading it, rather than waiting for the DVD to rent it.  But I have to think that its not a large number of people that fit into that boat,  and so to shorten the theatrical release, which they know would effect the theatres, is kind of wrong.

Then again, that is probably what Odeon is hoping for.  Some kind of concession from the Disney.

Normally, for the release of a feature film, theatres are forced into a deal whereby the distributer will take up to 60-70% of the revenue generated from ticket sales (sometimes more) for the first 3 weeks of a films release.  Following the 3 week period, theatres get a bigger cut of the ticket revenue, but its usually within the first 3 weeks that a film will see the majority of its customers, thus limiting a theatres profitability from box office sales.  So if a theatre manages to keep a film longer it profits the theatre.  If Disney wants to shorten Alice in Wonderlands  run they will most likely have to give a larger portion of the box office revenue to the theatres.

In terms of other theatres  that may take a stand against Disney,  there are reports that AMC may be dropping Alice in Wonderland as well.   With 2 weeks to go for the release of Alice in Wonderland, AMC still hasn't made an agreement to screen it.  AMC not showing Alice in Wonderland would be a major blow to Disney since AMC is the second largest theatre chain in North America and has an estimated 4612 screens worldwide.

In any case, I hope that this all gets worked out.  I would hate to see a film like Alice in Wonderland marred by something like this.  Disney just give the theatres their time.  Piracy will always be with us.
Posted by Chris Everything at 12:54 AM