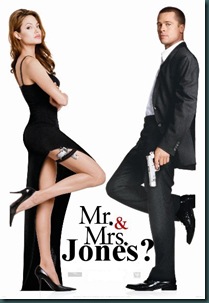 This morning as I went around looking some stories for my blog I came across this post over on The Movie Blog.

Apparently, instead of doing a sequel to Mr. & Mrs. Smith, Fox has made the decision to do a reboot of sorts of the franchise.  The new film will be called Mr. and Mrs. Jones.  (See how clever Fox is.) And will follow a very similar story to that of Mr. & Mrs. Smith.

Mr. and Mrs. Smith was released back in 2005 and starred Brad Pitt and Angelina Jolie as Mr. & Mrs. Smith,  who were both hitmen from rival companies. What made the movie interesting was that neither Smith knew that the other one was a hitman for a rival company.  Which all played out on screen when they both found out.

What surprises me here is why they aren’t simply just doing a sequel.  Anyone that I know that has seen Mr. & Mrs. Smith thinks it was an awesome movie.(Myself included.)  So to reboot it, (or rework it as The Movie Blog calls it), seems to be a bit strange.  Why destroy a franchise if there is nothing wrong with it?

I have to agree with Rodney from the Movie blog on this one.  This  sounds like a direct to DVD film.

Posted by Chris Everything at 1:27 PM