What Film will Get Nominated? 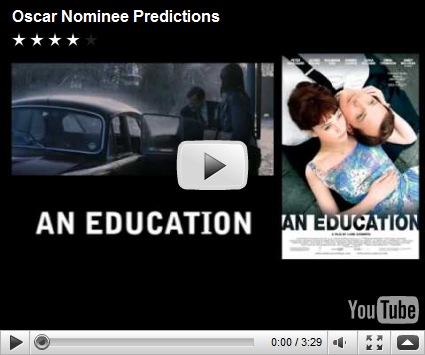 John over on the Script to Screen blog put up an interesting post listing the films that he believes would receive a nomination.  (See video above.)

With 10 nominations now possible for the Oscar this year, it will be interesting to see just what films will make it into the top 10.  That's probably why everyone seems to be coming up with their own list of films they believe will get an Oscar nod. The list that the guys at AMC have come up with is pretty interesting, as they include Inglorious Bastards, Star Trek and ‘The Hangover’ on their list.  Could these films possible get a nomination?

Well it appears that John might be on to something.  This morning, I was reading through The Toronto Star’s Entertainment section where I saw an article listing out what films and actors they felt would be receiving a nomination for this years Oscars.  Their list is pretty similar to AMC’s list and although they don’t have The Hangover, and Star Trek in there list, they are still listed as possibilities.

Certainly, I don’t feel that either of these films have a possibility of winning the Oscar.  Its just interesting to see more mainstream films making the best picture list.

For those that were wondering what my pick for best picture is.  My money is on ‘The Hurt Locker’.  I would very much like to see ‘Up’ win the Oscar, but I still doubt that the Academy is ready to vote for an animated film to be best picture.


So what film do you think is the best picture?  Could Star Trek or The Hang Over be contenders for the Oscar?
Posted by Chris Everything at 11:08 PM