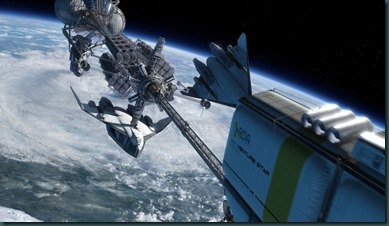 AMC’s Script to Screen Blog is reporting that the Sequel to Avatar will possible take place outside of Pandora.  If it will or it won’t no one is really sure. What seems to be certain is that space will somehow factor into the sequel.  This has been gathered from a comment that James Cameron recently made during a red carpet interview.  James Stated,

"I can't say anything about the other moons and the Polyphemus system because that's top secret because they are going to appear in the sequel."

What that exactly means is anyone’s guess. This could mean that the sequel picks up right were the last film left off, were we see the ship leave the planet to humans returning to Pandora. Your guess is as good as mine.  But with over $2 billion and counting revenue at the box office, we know we will definitely be getting a sequel. No studio in its right mind would forgo a sequel, if a sequel is possible.

But enough from me,  what do you think?  Where would you like to see the Avatar sequel take place? In Space?  Or on Pandora?

Posted by Chris Everything at 10:51 PM