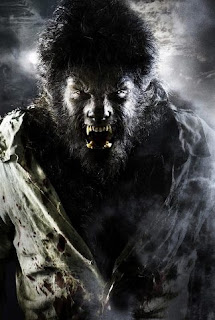 Well its seems one person thinks so.

I don't know if this is a reflection of the absence of werewolves from the main stream or just the type of crowd that Twilight mainly attracts, but it seems that at lest one person thinks 'The Wolfman' is a rip off of Twilight.  That's right.  You aren't reading that wrong.  Someone out there thinks werewolves started with Twilight.

Twilight is by all rights is a huge phenomina, especially among the female audience which made up about 80% of the film going audience.   The tale of a vampire that falls in love with a human has made hundreds of millions at the box office and sold millions of books world wide.  Its no wonder that for many female readers, especially the much younger female audience,  their exposer to werewolves has probably been limited to just that of the Twilight saga.   Anyone that has seen last years film, knows that Jacob (Taylor Lautner) becomes a werewolf and a rival to Edward for Bella's love.  Combined with some hard abs many in the female audience have been very interested in werewolves lately.  But it appears that love don't make it to The Wolfman that released a couple of weeks ago.

The Latino Review has published an e-mail that it received from a fan that seems to be quite upset with Universal for "ripping" off Twilight's wolf pack.  Ya you read that right.  Even though the original 'The Wolfman' release back in 1941 and the Twilight series didn't hit the scene until 2005 Universal has clearly ripped off Twilight.  Its obvious isn't it.  In fact Stephanie Meyer the author of Twilight must have done some time traveling since she was only born in 1973,  a full 32 years after the release of 'The Wolfman'.  I wonder how she did it.

But in any case, I'll lay off of this poor girl.  She clearly got ahead of herself and wrote something that she probably greatly regrets right now,  especially since her e-mail is now posted on the Latino Review for all to see and call her funny names in the comments. I sincerely hope someone told her the truth of where werewolves came from.
Posted by Chris Everything at 11:28 PM