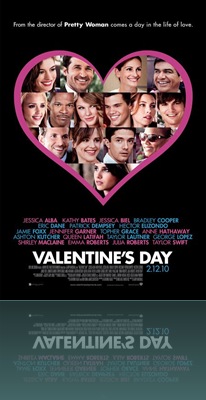 Well I guess its no surprise here.

AMC’s Script to Screen Blog is reporting that Valentine’s Day is #1 at the box office this weekend with $52.4 million dollars.   Valentine’s day was followed by Percy Jackson with $31.1 million and The Wolfman with #30.6 million.

I guess the lesson here is that romance bets horror on Valentine’s Day weekend.  Unlike with my friend who took his girl to see ‘The Wolfman’, which was a great film for anyone interested.

Also, I thought I should point out that this marks the second week in a row now that a chick flick has managed to snag the top spot at the box office.  You may remember that Dear John topped the box office last weekend.

Women are really becoming an important part of the box office this year.  Which will continue with high profile films like Sex in the City and Twilight Eclipse.  Its good to finally see women finally served as an audience since they do pay their fair share towards the box office.

I just hope us guys can avoid getting dragged in to some of those flicks ourselves.

Posted by Chris Everything at 7:32 PM