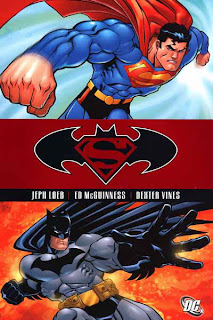 AMC's Script to Screen blog is reporting that Christopher Nolan will be taking on a "Mentorship" role on the forthcoming Superman Reboot.  Christopher Nolan is most remembered for his very successful reboot of the Batman franchise and its sequel The Dark Knight which is rank #3 on the all time Domestic boxoffice and #5 overall Worldwide.  It is no wonder why DC would appoach Nolan with this offer.  The only problem is, what does being a mentor on a film project really mean?

Will Christopher Nolan be on set every day?  Just in the planning phase?  How much say does he have?  In any case, I really respect Christopher Nolan as a director and I think that having him on Superman  is going to be a  good thing for us fans.

Another benefit with having Nolan on Superman is the fact that we will prehaps be able to have more a connection between the two franchises.  Maybe even a crossover.  (Well we can hope.)  In any case, I have to agree with John from AMC,  this could be a way to help DC build towards a Justice league film.   Kind of similar to the way that Marvel is building toward their Avengers film.

But you know, a Batman and Superman film would be pretty sweet too, if that's all that occurs.  I hope to see one.
Posted by Chris Everything at 11:41 PM