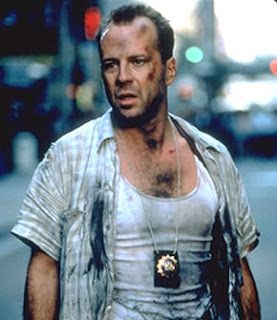 No one can deny that Die Hard is one of the biggest action movie franchises to exist in our lifetime.  But the question that John at the Script to Screen blog poses, is should the Die Hard franchise continue?  I think so.  Let me explain.

Although its kind of weird for us to really be seeing sequels for a film series that started over 20 years ago,  I think Die Hard still has some strength left.  Two years ago, when 'Live Free or Die Hard' (Die Hard 4) released many of use asked the question of whether or not they should be making a sequel to a film that hadn't has a new film in the franchise since 1997.  But following on the heels of a very amazing sequel to the Rocky series in Rocky Balboa, many of us held out hope that Die Hard 4 would be a great sequel as well.  And, anyone that grow up watching the Die Hard franchise were very interested in seeing this film, whether it was good or bad.

But when it was announced that Die Hard 4 would be PG-13, it began to place doubts in the mind of many people about what kind of film we would be seeing.   The Die Hard series was know for being R rated and for good reason.  But now with Die Hard 4 having a PG-13 rating,  even the famous tag line that Detective McClane would use in every film was off limits given the PG-13 rating.

As Die hard 4 released to theatres many of us were relieved to see that Die Hard 4 felt like a R rated film and even McClane's famous tag line was in the film, albeit it was carefully censored.  And the film was pretty good to, although I must say that it did have its weaknesses.  The villian wasn't the strong point of the film, as he was the worst villain of the franchise.  And the story wasn't the greatest of the franchises either.  But, Bruce Willis was good as John McClane and the other characters gave pretty good performance.  That's why I think this franchise still has legs, since Die Hard always has a different villian and story in each film.  What doesn't change is John McClane.  And if Bruce Willis can still be John McClane and do him well, I think that their is still hope for this franchise.  Die Hard is about John McClane trying to stop bad guys.  You can change the cast and the situation, just as long as you have John McClane.  If Bruce couldn't do it I think that it would be time to stop.

Then again,  I must say that I think Bruce Willis should probably consider passing on the a Die Hard 6.  Bruce is getting older and thus he can't play John McClane forever.  So he should try to finish off Die Hard on a high note and retire from the franchise.  As for who should take over or when a new Die Hard should come after Bruce Willis leaves, I'm not sure I can really answer that.  I definitely feel that  if Bruce Willis leaves, Die Hard should rest for at lest a few years, the longer the better.  Who will take over is anyones guess?  John McClane is very heavily tied to Bruce Willis and so it would be very hard to replace him.

In any case, I wonder what they will call Die Hard 5?  Live Freer or Die Harder.  No that doesn't sound good.  I just hope they do something better with their naming scheme and get back to simply calling it Die Hard.  So what are your thoughts?
Posted by Chris Everything at 1:33 AM