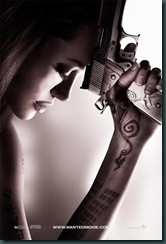 I think the picture looks the just the way I feel right now.

On Friday, I put up a post discussing how Angelina Jolie had left Wanted 2 following Universals decision to pass on a film called Gravity.  Well, it appears that Angelina isn’t finished leaving films just yet.

The Movie Blog is reporting that Angelina has left Gravity in order to star in a film called Serena.  The exact reason for Angelina leaving Gravity is unclear.  Gravity and Serena are both very different films.  Gravity is supposedly very similar to last year’s Sci-fi film Moon.  While Selena is a period piece, based on the 2008 novel ‘Serena’ by Ron Rash.  Perhaps Angelina thought that Serena would give her more Oscar potential and thus decided to skip on Gravity.

Whatever the case Angelina has left yet another film project and left us all wondering exactly what is going on.  I do believe that Serena does fit more with some of the previous films that Angelina has done.  In Serena, Angelina will play the Serena, the wife of George Pemberton whom sets out to build a lumber empire.  Serena however begins to pushing her husband to do more and more “ruthless acts”.  And when Serena finds out that she can’t have children, she sets out to kill her husband’s illegitimate child.

Such a role would definitely push Angelina’s acting, as well as, possibly earn her some nominations if done well. Films like Serena usually end up earning nominations at the Oscars, so it probably was good move on Angelina’s part to leave Gravity in order for a possible nomination.  Albeit, I wish it didn’t come at the expense of Wanted 2.

Posted by Chris Everything at 2:47 PM