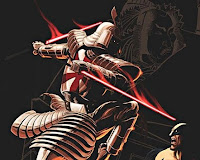 Good news for all the Wolverine Fans out there.

Cinematical is reporting that Wolverine is set to film this coming January. I'm not sure if that’s a good thing or a bad thing. The first film was ok at best. And that whole multiple scenes idea at the end of the movie kind of jaded me towards the first Wolverine. But, I'll give them a chance to redeem themselves. After all it’s Wolverine.

Wolverine 2 seems set to be a very different film from the first one as it deals with Wolverine's adventures in Japan. Anyone that is a fan of the comics knows how Wolverine learned to be a Samurai and fell in love with Mariko, which leads into a feud between clans, due to Mariko's mob ties. This could be a really great film for us fans. The Hand is a really awesome group to have in a film. The only thing I’m wondering about is if Wolverine will be able to cut loose in this film. An R rating for Wolverine would be great this time around, but I doubt will be getting it.

In any case, the question that seems to be facing us now is, just who is going to direct this film. Currently no director is attached to this film project and so, we don't really have any idea how this film will end up. The author of the post seems to think Ang Lee would be a good choice and I kind of agree, although I'm still a bit iffy on him doing comic book films after his Hulk film.


Whomever they get need to be someone that has a vision of Asian culture, preferably Japanese culture and knows how to put together great fight scenes. I would probably lean more towards a James McTeigue to direct Wolverine. James has directed a number of films with fight scenes, from V for Vendetta to Ninja Assassins. I have confidence James could pull off a Wolverine film.

So what are your thoughts? Who would you have direct Wolverine 2?
Posted by Chris Everything at 9:40 AM