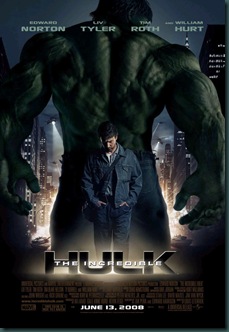 The Movie Blog is reporting that Marvel may not be making a Hulk 2. This is really disappointing given how good ‘The Incredible Hulk’ was done, as it made up for the horrible mistake that was Ang Lee’s Hulk and it really looked like ‘The Incredible Hulk’ was finally going somewhere. But, now there is word that Marvel may not be willing to bring Hulk out for another outing.

While speak at SXSW, Edward Norton was asked about a Hulk 2. To this Edward responded,

“I don’t think so,” he said. “I think it has got more to do with what Marvel is doing. I get the sense they have this grand vision of unspooling a lot of their characters and then starting to put them together. I think they can only do so many at a time. Obviously, they are doing Iron Man 2 and then getting some of the new ones out.”

This is really disappointing. I hope Marvel reconsiders their decision or that this is simply an over site. We need more Hulk.