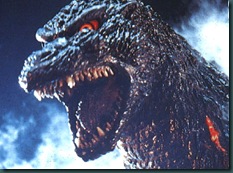 Just as we thought that we were finally safe, Godzilla returns.

The Movie Blog is reporting that Legendary Pictures is set to remake our favourite giant monster. Apparently, Legendary is in early negotiates for Godzilla, so whether or not it will really happen is unknown at this time. Many of you may remember that there was a remake to Godzilla released back in 1998, so one has to wonder if it’s a little too soon for another remake. Then again, a good many people probably didn’t run out to see the Godzilla remake as it was panned by a good many critics, only garnering a 26% on Rotten Tomatoes.

So what do I think about a Godzilla remake? I would definitely like to see a remake to Godzilla. There has been many technological improvements since the last Godzilla Remake was released and I really believe we could get a good film out of this franchise. Who wouldn’t pay to see a monster tear apart a city? Then again, maybe that is just me.

What do you think? Is this remake coming a little too soon for you?

Posted by Chris Everything at 10:34 AM