At the Movies Gets Cancelled 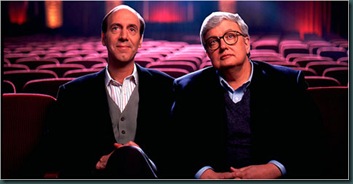 I guess it was only time.

After 24 seasons on TV ‘At the Movies’ will finally be going off the air. It’s quite sad that a film show with that much history on TV will be cancelled, but then again since Ebert left the show some time ago, the show really hasn’t been the same. Although, according to the post on ‘The Movie Blog’ it appears that the decision to cancel the show was due to its half hour format.

But lest face it, I don’t think many people were really watching ‘At the Movies’. I do disagree with The Movie Blog in the fact that think review shows are relevant. I believe people would watch a movie review program, just as long as its interest and somewhat entertaining, which At the Movies just hasn’t been doing lately.

Also, I think there was a problem with the personalities. People respect Ebert, but they didn’t have the same respect for the new guys on the show. If the new personalities were phased in, I think they could have kept the show going. But with Ebert dropping out do to cancer, it did force the change.

Whatever the case, film fans will have to turn to the internet for their film review fix. Not that they weren’t already.