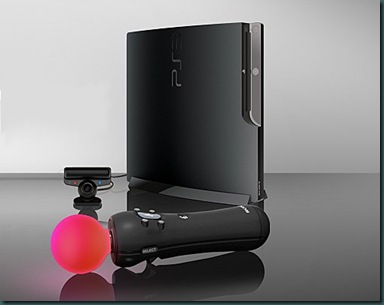 And it doesn’t look good. Or does it.

Imagine you’re a company that develops a revolutionary technology that you’ve built into your gaming console and this technology manages to put you on top of the video game console wars. Seeing the great success of the above company, the company’s rivals decide to go out and copy the other company’s innovation. The only problem with the above company is that its two rivals have technologically superior systems and are thus capable of supplying a better gaming experience.

The above is the situation that Nintendo finds its self in. This week at GDC, Sony showcased their Playstation Move technology which pretty much copies the Wii-mote and Nunchuck combination in reverse. Unlike the Nintendo Wii Mote which acts like a camera for the Wii Sensor bar, Sony’s Playstation Move uses a Camera to track a glowing ball on the end of their main controller. Also, it uses a secondary controller which has been cleverly named the sub controller. Ok maybe not so clever.

Over the years of watching the Nintendo Wii, the sales numbers seemed to suggest that many people were simply satisfied with Wii Sports. It did enough for them and they enjoyed playing it. Certainly as Wii Fit and Wii Sports Resort launched many people did buy those as well, but I’m kind of feeling that selling new hardware and games to the causal gamer crowd, could be a hard sell. Certainly anyone that was interested in a Playstation 3 might feel more motivated to pick up a Playstation 3, but I have to wonder if the Wii audience will be as interested in moving over to the Playstation 3 or having it as a second system.

Being a more hardcore gamer, I have had interests in the Playstation 3, but never bought one since I already had and Xbox 360 and most games appear on both the Xbox 360 and the PS3. So there were only a handful of games that came out that made me wish I had a PS3. With the announcement of the Playstation Move I don’t really feel a huge motivation to buy one. The only thing that is currently motivating me to want to pick up the PS3 is for its Blu Ray player and I’m pretty certain that many people are probably in the same situation I’m in.

I can’t foresee the Playstation Move having a tremendous impact on the Wii’s audience. Then again, I could be wrong. What do you think? Will you be buying a Playstation Move?

Posted by Chris Everything at 12:10 PM