Dark Crystal Sequel on the Way 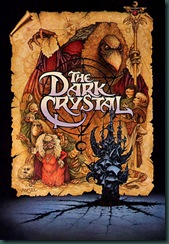 AMC’s Script to Screen is reporting that a Dark Crystal sequel is in the works. Now for many people reading this you probably have no idea what The Dark Crystal was and I don’t blame you. The Dark Crystal was a film that was released back in 1982 by the Jim Henson Company, and was an amazing movie in its time, but unfortunately never had a sequel. Then again, If I remember correctly the story did not demand a sequel. (Can you tell I haven’t seen the movie in a while?)

So I ask myself why they would even consider a sequel to a film which probably hasn’t been seen by a good many people and hasn’t had a film released in the series in almost 30 years. Not that I hated The Dark Crystal, I just think that they should be considering a remake or reboot rather than a sequel at this point. Then again, The Dark Crystal sequel is in many ways a reboot since the story takes place hundreds of years after the original movie. So you shouldn’t expect to see any of the original characters.

In any case, have you seen the original Dark Crystal? Are you looking forward to a sequel?

Posted by Chris Everything at 10:11 AM