Roger Gets His Voice Back 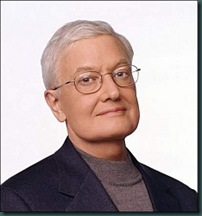 This is great news.

Many of you may applaud him for being outspoken on film.  Some may dislike his reviews or maybe you’re a fan.  Whatever the case, I think you can all agree with me when I say that since Roger Ebert lost his ability to talk due to losing his bottom jaw to cancer, his voice has been missed.

But now, it appears that technology will give Roger’s voice back.  The Movie Blog is reporting that a Scottish company, CereProc, has taken samples from Roger’s movie commentaries to create a text-to-audio system for Roger Ebert.  And, Roger plans to make good use of it.

According to The Movie Blog, Roger Ebert will be doing a Oscar prediction segment today on Oprah. Also, Roger believes that his voice may be good for radio and webcasting.  This is great news.

I really hope everything works out with Roger’s new voice.  I’m glad he got it back and I hope to hear from him.  Perhaps even today.

Posted by Chris Everything at 12:39 PM