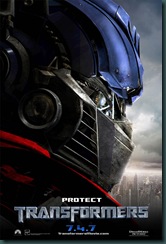 I’m not sure that it’s a good ratio.

If Michael Bay could work out a way to have the Transformers actually be the main focus or even have a Transformer be the main character of the next Transformer film, it would go a long way to appease the fans. Then again, maybe it’s just me.

So what do you think? Are do you like the idea of more humans being in the next Transformers film?

Posted by Chris Everything at 11:59 AM