Green Lantern’s Ring Gets an Upgrade 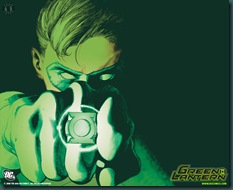 I’m not quite sure how to take this.

The Hollywood Reporter is reporting that Warner Bros. will now be filming Green Lantern in 3D. This could be a good thing or a very bad thing. Let me explain.

Any fan of the Green Lantern comic book series knows that the Green Lantern’s ring is capable of creating three dimensional objects, and so the idea of seeing a 3-D Green Lantern isn’t a strange idea. I just know that if done wrong it could get very cheesy, really fast.

Imagine you’re sitting in the theatre and a bunch of green objects start projecting out of the screen at you. Perhaps Green Lantern will shot his ring off while facing the screen. Don’t get me wrong I like 3-D, as long as, there is a real vision behind using it. Many very bad films, are now adopting 3-D for the purpose of getting people in the sits and I don’t want Green Lantern to be one of those films.

I want to be able to go out to see The Green Lantern film, wearing my Green Lantern shirt and not have to hide after the film. That’s all.

So what are your thoughts? Do you like 3-D in films?