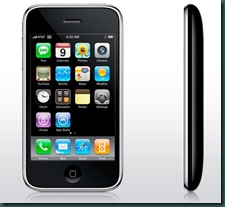 Engadget reported yesterday that Apple is currently working on the next generation of the iPhone. Apple typically refreshes their line up of device once a year, but what makes it a bit interesting this year is the release of the iPad. Apple would have typically announced the release of the next iPhone by this point in the year, but it looks like Apple is holding off for sometime after the iPad releases.

According to some of the updates posted to Engadget, the next iPhone is scheduled to release on June 22nd and will sport a front facing camera. I find the addition of a front facing camera kind of interesting given the fact that cell phone providers over the years have tried to introduce video calling, but with no success. Could a new iPhone really make video calling cool? Certainly, it could.

Being a very popular handset the iPhone could make video calling become very successful. If a large number of people run out and buy the latest iPhone device and happen to get video calling capability with it, I could see a lot of people opting to use it. Especially now with the next iPhone being 4G ready, this could be a very popular method of communication.

Although some people may decide not to use the video functionality, as many people don’t necessarily like to talk in real time. Some of you may remember a post I put up a few months ago, discussing an article from Time magazine, in which the author (Joel Stein) stated he didn’t like the idea of Skype Video (see post here). In the Time article, Joel didn’t like Skype Video because he would now have to pay attention when his wife called him, since she could see what he was doing. Also, he cited some studies which found that many people were deciding to talk via text message instead of making a phone call, as many people want to time shift their conversations. In other words, people want to talk when they want to talk as opposed to having to stick around for the duration of a phone conversation.

Could this time shifting idea be true also for cell phone conversations? I think to a certain extent it is true. Many times instead of calling I’ll send a text since I can send out the text faster than to call and talk to the person. Some people just text on their phone and barely talk. So the iPhone having video calling capability may not necessarily guarantee that video calling will be successful.

So what are your thoughts? Do you see yourself making video calls?

Posted by Chris Everything at 11:41 AM