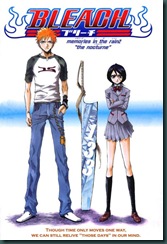 I’ve been wondering when they would finally make Bleach into a movie.   SuperHeroHype is reporting that Warner Bros. will be adapting the popular manga series Bleach into a feature film.  Now this does fill me with excitement and with a great sense of worry.

For those that were wondering, I’m a huge Bleach fan.  Bleach helped me to stay sane last year when I was between jobs, as it helped me pass the time.  From the moment I started watching Bleach, I’ve always thought that it would be a great movie, but I have been a bit worried that the studio that would get the project, would mess it up, especially after last year’s Dragonball Evolution.

Dragonball Evolution was a horrible movie. Not only was it super cheesy, it had some pretty bad acting and was a major disappointment given the anime that it came from. This is why I’m worried about Bleach. If Warner Bros. isn’t willing to put the effort into properly adapting Bleach, it could become just as bad really fast. Animes typically have themes in them that don’t necessarily translate well into the real world.

In any case, we will have to wait to see what Warner Bros. will do with Bleach in the coming years. I do have more faith in Warner Bros. than I do in Fox, so hopefully it will be worth the wait till Bleach releases.

Posted by Chris Everything at 12:24 PM