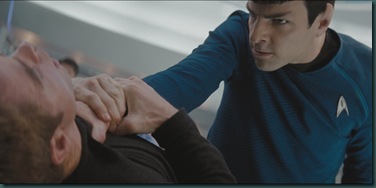 Anyone that watched Star Trek last year, knows that Zackary Quinto’s Spock was a big part of what made Star Trek good.  But it appears that all of Zachary’s success has taken its toll on him and now he’s looking to take a break from Star Trek.

AMC’s Script to Screen blog is reporting that during an interview with Wired to promote the Star Trek MMO (to which Zachary lends his voice), Zachary mentioned his desire to take at lest a 2 year break from all things Star Trek.  Zachary started he would be involved in “….no movies, no conventions, no anything for a while.”  What this means for Star Trek’s sequel, which is set to release on June 29, 2012,  is uncertain.

I have to agree with Christina Warren over at the Script to Screen Blog.  Zachary could take a 2 year public break and still be in the Star Trek sequel.  I can’t imagine Zachary walking away from Star Trek.  So I wouldn’t be to worried about him getting replaced or having a sequel without Spock.

But if Zachary was to walk from Star Trek, who would you like to see play Spock?

Posted by Chris Everything at 10:41 PM