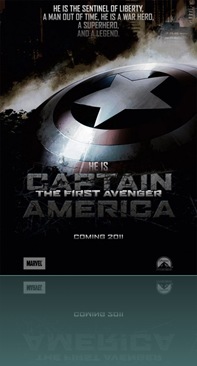 Well I guess it didn’t take fans any time to get started producing posters for the forthcoming Captain America film.  Which by the way looks awesome.  Well the poster that is.

Many of you may remember fans coming together to produce posters for the next Batman film shortly after ‘The Dark Knight’ released to theatres.   Many of these posters were in part fuelled by rumours of what the next villain was going to be or just simple wishful thinking on the part of the fans.  But all of them have been pretty impressive, and so, I guess that there is no wonder to why fans have moved to create this poster for the upcoming Captain America film.

Whoever is behind this poster is quite talented and if I was producing the Captain America film, I would try and use it as a teaser poster.  But if history continues to repeat itself the studio probably won’t use this poster, but will instead create their own.

I seriously hope that the guys behind this poster get some form of recognition.  As I’m certain that some people out there would probably want to use their services to help them market there small projects.  And its great poster.