Engadget has a Nexus One 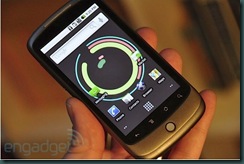 Engadget is reporting  that they have managed to get a Nexus One phone to play around with.  This little piece of geeky desire, (or maybe just mine), seems to be pretty fully loaded with a 1 GHz CPU, a 480 X 800 display, 512 MB of RAM and ROM and 5 megapixel camera with LED flash.  But is it any good?  Is it the iPhone killer that it has been made out to be?

Well.  Based on Engadget’s hands on it appears that the Nexus One does perform fairly well, but isn’t the iPhone killer we hoped for.  The author of the article described the Nexus One as a better Droid.  It is faster and takes great pictures, but still suffers some problems with “a little stuttery' behaviour”.

The truth be told, I’m kind of glad to hear someone giving us some concrete details about the Nexus One.  For a while, all that was out there was rumours and hype, so its nice to get something solid for a change.  I am a bit disappointed that it isn’t the iPhone killer, but I’ll take it.  The iPhone looks great, I just don’t want to get further locked into Apple’s ecosystem.